VHÖL, one of the few “supergroups” that truly live up to such name, just put out a new track entitled “The Desolate Damned”. It rips, but how could it not? The band is comprised of Mike Scheidt (YOB), John Cobbett and Sigrid Sheie (Hammers of Misfortune) and Aesop Dekker of Agalloch fame. Stream the song over at NPR and get all excited for their upcoming LP Deeper Than The Sky, scheduled for an October 23 via Profound Lore. So far, it sounds like it will be a departure from the gritty blackened thrash of their debut album (listen here) in favor of shredding space thrash. I dig.

Are you into depravity, doom and death? Isn’t everyone? Autopsy, the forebearers of Mullet Death/Doom (h/t Leif Bearikson), decided to make the world a shinier place by dropping a double dose of the aforementioned trinity. Read it straight from the band’s Facebook page.

In other death/doom news, TovH favorites Hooded Menace have just released a new track from their upcoming record, Darkness Drips Forth, which is bound to hit the streets via Relapse Records on October 30. Jam “Elysium of Dripping Death”, read our interview with the Funlandians and then hit the RR website to get your pre-orders straight.

Gire, a Hungarian avant-garde death metal band, is getting its lone album repressed by Blood Music. Head over to Bandcamp and stream the self-titled LP, available as “name your price”. If you wish to, physical media options are displayed below:

And now, for the most dick-wiggling news of the month, Virginia’s hard to categorize Inter Arma are bound to release a third full-length album early next year via Relapse Records. Read it from them:

“On September 19th we’ll return to Dark Art Audio in Madison, TN to begin recording our third full length record. The sonic alchemist Mikey Allred will once again sit in the captain’s seat for this journey. Album title, etc. are TBA. As always, expect the unexpected.”

When it comes to this band, the unexpected pays off tremendously. Their last release was an EP, The Cavern, a 40+ minute opus that features gristle-throbbing dynamics, hefty sludge and some folk/americana thrown in for good measure. Jam it below in case you haven’t. Please, stop violating.

You can catch them on tour with Kylesa (one of my favorite bands) on the following dates: 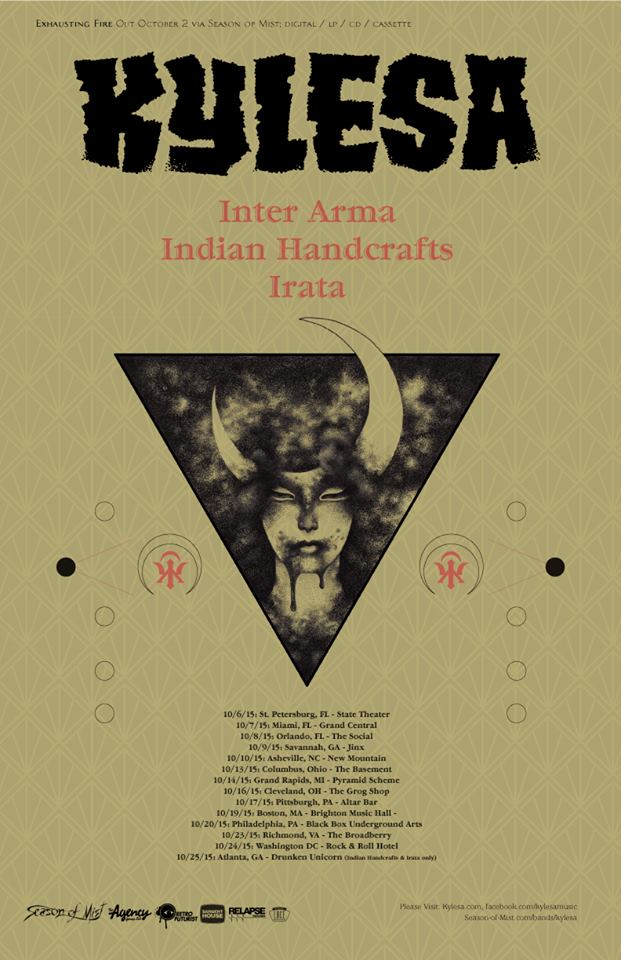 Speaking of which, there is a new Kylesa track out, entitled “Night Drive”. I used to do this weird thing in which I’d go out driving at 2 AM to pretend I was Ryan Gosling on Driver. This is something I would definitely jam on one of those trips, probably on the return home. It’s a sweet song, for sure, but it also brings the riffs. It will be featured on Exhausting Fire, the band’s seventh (wow!) full length. October 2nd is the release date, and Season Of Mist the label.

Last but not least, Napalm Death released a video for “How The Years Condemn”, a song from their album Apex Predator – Easy Meat. My friend Edward thinks it’s an unflushable album. What do you think?

That’s it for now. I hope your pants are just as ruined as mine were.

I am the Fish God.