Sci Fi Or Die Motherfucker! An Interview With Dave Disanto of Vektor

Vektor are one of the most exciting bands in the world right now. I’ve heard their new album Terminal Redux, and I can tell you that the band is in the process of revolutionizing the genre yet again. I got to sit down with Dave at the Philly date of their current tour with Eight Bells and Voivod and touched on just about everything.

After a great show like tonight, how do you feel?

Sweaty! It’s fucking awesome man. Being on the road with your favorite band is always a good time.

How do you even register that?

It didn’t fully even hit me until the first night when we were trading off tour stories with Voivod. The whole time leading up to it it just didn’t even hit me.

Obviously Voivod have recognized you before but how does it feel to be on this next level?

It’s great! They were the ones that asked us to tour with them so of course we said yes. It’s just surreal. It’s weird being a fan and then being like a friend and peer with those guys. It’s awesome. 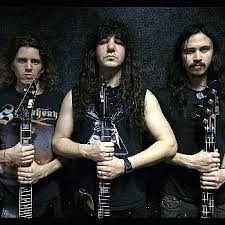 What I really wanted to get into was NOFX – Tell me about your relationship with them.

I have not stopped liking NOFX since I was 13 and The Decline is one of my all time favorite albums.

What drew you in?

The album Punk In Drublic. Being a skateboarding teenager of course I was going to hear that album. During a point in my 20s I didn’t stop liking them but I went to a quieter period but then, in my later 20s, I got back into them in a big way and they had put out a bunch of albums since then. Something that impressed me about them is just how they are solid. Album to album they keep putting out solid good music. If you take a quick look at their whole career and how many good songs they have it’s ridiculous.

Does NOFX impact your own songwriting?

Sometimes. I get ideas from everything though. I guess some passages from The Decline get me. The song “Asteroid” on the new record has a riff that kind of sounds like them.

I totally got that too… it’s like a skate thrash dance part!

Do you want to talk about the concept behind Terminal Redux?

I can give you a quick version – but it’s hard to explain; that’s why I wrote it down as lyrics and not a story. It starts off with the astronaut from Outer Isolation. He regains his memories and ends up finding a molecule in space that extends peoples lives so they can live hundreds of years. He brings this molecule and a whole load of it back to the Signess Terminal which is an all controlling space regime. The astronaut had basically been exiled for doing some shit that Signess didn’t like, but he comes back offering these molecules for people to use them to control population. He regains his ranks in his regime and throws a coup with the government, overtakes Signess, and turns it into Signess V2. It’s basically a story of life and death really. The end signifies our place in the cosmos I guess, and the overall message is to get our hands out of shit that we’re not supposed to have our hands in and the natural order of things. It’s a really big story, and it’s best once it comes out to just read through the lyrics. It will make more sense.

What inspired you to write that message?

That’s a theme in a lot of our songs. “Forest of Legend” for example is about how once people back off from the world they stop destroying it. Nature so quickly reclaims the lands that we’ve damaged and overwhelms pollution and deforestation. Nature has its ways of dealing with trauma and disasters without our help. I’m not saying we shouldn’t help endangered species and stuff – if we’re causing it we should try to help. There’s a lot of messages in there. “Dying World” for example is about us fucking the planet up.

Terminal Redux is obviously sort of a sequel to Outer Isolation. Will the next record be part of the same canon?

I’m sure it will be. My brain is only so big. I’ve got a few riffs but nothing else. I have no idea about the direction of the next album.

Well were you concerned about the five year gap between albums?

I honestly didn’t know that much time had passed until a year ago and then I Was like “Holy crap we need to get going!” There were a lot of personal reasons for that gap, and it didn’t worry me too much because we were playing around and doing shows and still had a lot of buzz online. It wasn’t like we were just forgotten. I think people’s minds are going to be blown with this new album.

Will there be similar length gaps in the future?

I hope not. Part of why this album took forever is that it was my first real attempt at writing a concept album, and it was a lot more of an undertaking than I thought it would be and I wanted to push my songwriting further than it’s ever gone. It’s an experimental album but it still sounds like Vektor.

Can I ask about the female vocals and your cleans? Why did you bring those in?

Because it’s a concept album so why not? (Laughter) The song “Collapse” I do clean vocals through the first half of it, and it’s such a mellow somber sad song I didn’t want to dirty it up with my normal screechiness. I’ve always been a big fan of Pink Floyd so I was trying to channel David Gilmour with that. Some of the clean vocals were inspired by Pink Floyd.

The girls… when I was writing the song “Part of the Void” I thought it would be so cool to have backup choir vocals, and there’s a lot of talent in Philadelphia where I live. I was at a fair with my job and one of the girls who ended up doing backup vocals was singing there so I got her contact info and we made it happen and it was so epic sounding. Th other girl came in too, and she has a super soulful and powerful voice. I think the overall take home feeling is epic.

Are you going to expand on those elements in the future?

I don’t know. Probably. But not to the extent of it being the whole album. We had female vocals in two tracks this album; next time it might be three, but that’s it. I don’t want to get too out there. That’s not my thing. I’m never going to do something like Opeth where they used to only sprinkle in clean vocals and now there are way too many. Those will be sparsely used in the future.

One thing I noticed listening to the album is that it feels a lot more dramatic. It flows a lot better – is that part of your own maturation as an artist?

Definitely. When I was writing Black Future and even before that I was never classically trained and knew nothing about theory – it was just a natural progression. I try not to learn too much because I feel like music should be loose and free, but I definitely learn some stuff. This new album is super flowy and cohesive because over the years I have just learned how to tie things together. The older albums were just like mashups of riffs whereas this one just flows.

What do you love so much about music?

Everything – I don’t even know how to answer that question. I love getting blown away to the point where you literally get goosebumps on your arms. I like being moved. I’m not a very emotional guy except when I ‘m listening to music. It brings out something in me, whether it’s just energy when I’m listening to thrash, it makes me feel alive, but mellow stuff kind of makes me think about my life. It just drives my emotions and I think that’s what I like about it.

Any final words of wisdom?

Terminal Redux is out May 6th. Preorder it here, and catch them on tour with Voivod in a city near you.

Matt Bacon runs Dropout Media, a music consulting and management company in Brooklyn. He is sad a lot.