On Monday, extremely radical blog Sad But True: Plagiarism In Heavy Metal Art uncovered that the artwork for Hadeon, the upcoming LP from old school death metal band Pestilence, contained several elements that had been straight up copied from concept art for a crappy X-COM inspired video game called Fallen Skies. In a statement on Facebook, the band declares that they had no idea Hadeon’s artwork was plagiarized and placed the blame directly at the feet of artist Santiago Jaramillo of Triple Seis Designs.

Last week we proudly presented the artwork for “Hadeon”, the new album by legendary Death Metal band Pestilence. This, in itself, fantastic artwork was created by Triple Seis, a company specialized in artwork for Metal bands (they did many artwork related things before we contacted them) based in Ecuador. In the past months Patrick Mameli shared his thoughts on what “Hadeon” needed to look like when put into art, and Triple Seis created it. Hammerheart Records made a contract and paid a pretty decent amount of money to become the owner of this artwork, so we could use it for all releases and products we wanted to use it on/for. We were very pleased on how this turned out…

Then… Upon its publication we started to receive messages that several parts of this artwork were stolen and copied into this design. The messages were not merely rumours, but they were true! We were shocked when we were shown how obviously and without shame this was done, we were left in disbelief. Both Hammerheart Records and Pestilence had never experienced anything like this before, and we find it totally objectionable.

We hereby declare that we have to cancel this artwork, we sincerely apologize to all the people/companies whose artwork was used without permission. We did not know this and we would never ever support this. We like to make it 100% clear that we do not support any of these “work” ethics done by Triple Seis and have returned the artwork to them in full and we will remove all announcements and links related to this artwork to the best of our abilities. Needless to say that this effects our hard work, we are not finished yet for a release of “Hadeon”. We need to switch to solving this problem.

“Hadeon” will see the light of day, the release date is still March 2018. We will not give in and continue our journey to World Domination in 2018. We find great consolation in the support of the Pestilence legions supporting us worldwide, thanks a lot!

As soon as we have the new artwork to show we will make an announcement.

According to Sad But True, this is not the first time that Jaramillo has plagiarized artwork and as of press time, he has yet to address this accusation. But c’mon. Just take a look at this shit. 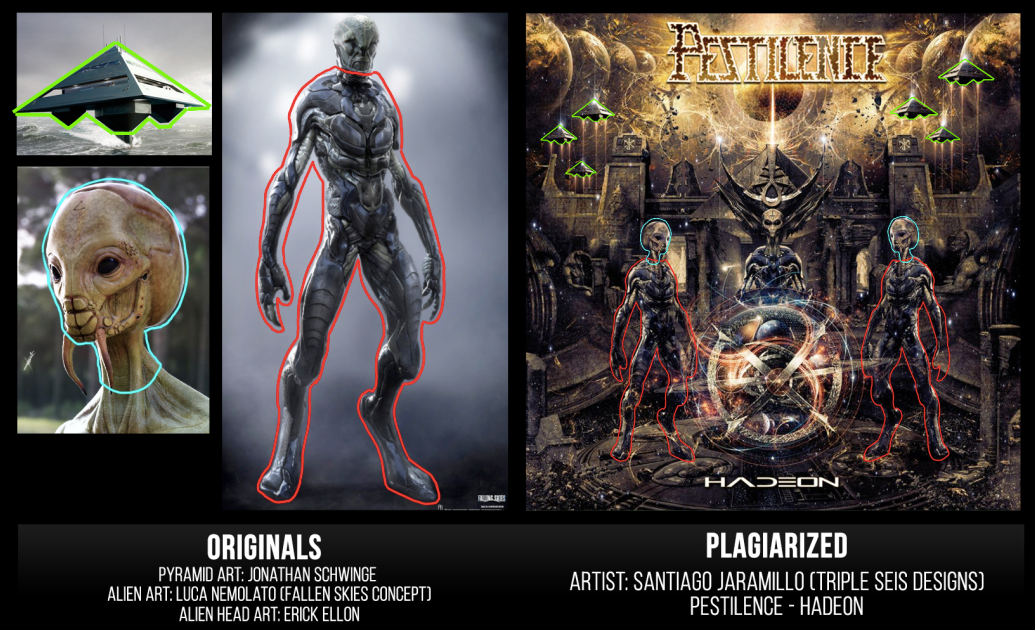 Artists, don’t do this. Bands, be sure to hire an artist with a good reputation. It’s a shame that the band and label will have to hustle to get new art ready in time for Hadeon‘s March 2018 release, but hopefully the band will choose artwork that isn’t so 3rd party Microsoft in the future.

Shotgunning Brews And Farts – An Interview ...