Enter the Mysterious World of Oum with Doum

There is very little mystery in the contemporary music landscape of 2016. Any interested fan can simply do a quick google search and learn about obscure underground war metal bands. The internet was pretty certain of Ghost singer Papa Emeritus’s identity well before Nergal accidentally gave it away. At least 109,700 unique bands are registered on Metal Archives, granting us as fans an unprecedented amount of data to explore at our leisure. In this climate, it’s rare to discover an artist or band that is virtually unknown; typically, even if you think you’re the first to discover a novel act, someone else on some other corner of the internet has already reviewed their demo. Well, my friends, last night I stumbled upon an honest to goodness mystery, a case I don’t think I’m anywhere close to cracking. So grab your microscopes and rev up your search engines, because we’re exploring the shadowy realm of Oum.

Doom fever is gripping the internet, and though I don’t possess a machine capable of playing the latest installment in the revered series, I do possess a Steam account and the capability of playing the BFG edition of Doom 3, the remastered and graphically enhanced version of the 2004 game released in 2012. As I am wont to do, after a brief session of assaulting demons with a chainsaw while my wife watched some silly comedy on Netflix, I decided to poke around online to see if there were any interesting bands named after Cacodemons. 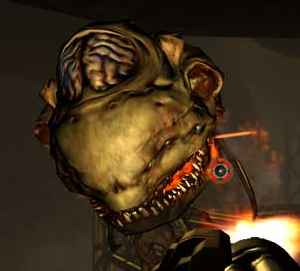 My search led me to Bandcamp, where, after sifting through several generic deathcore bands, I happened upon an elusive artist by the name Oum with a song titled “{CACODEMON}” on an album called Doum. Curious, I clicked play, only to discover a bizarre, monochromatic yet surprisingly multifaceted track that can only really be described as “devotional drone/doom.” Scratching your head? Picture in your mind’s ear the earth-crushing bottom-end of Sunn O))) with the zealous tribalism of Om and a healthy dose of strange effects courtesy of Tribes of Neurot. These diverse elements considered in unison and adjoined by some truly infernal shrieks and chants lead listeners on a hellish trek into Joseph Conrad’s Heart of Darkness. A fitting tribute, then, to the anxious atmosphere summoned by the burning wastes and claustrophobic confines of Mars within the world of Doom.

Curious, though, is that release date listed for Doum. Since the original Doom game was released on December 10th, 1993, the alleged release date of June 6th, 1993 for Doum is certainly questionable. “Who is this band, and when was this album actually written?” I wondered. The Bandcamp page itself affords few clues. There is no Facebook account linked, nor is there a website or other account listed. Interestingly, though, the band’s description provides a fragment from one of Aesop’s Fables.

The Dolphin, indignant at these falsehoods, dipped the Monkey under the water, and drowned him.

As it turns out, that aquatic connection is important. Although no google search or query on Metal Archives turned up any results, a combination of the words “Oum” (which, incidentally, happens to be a name shared with a Moroccan soul group of some repute) and “Marineland,” one of only two tags the band uses on Bandcamp, did return a hit. Apparently, Antibes Marineland, the would-be French seaworld, once hosted an orca named Oum. The nautical nature of the band’s header image now makes more sense.

So, now we have a possible inspiration for a name that seems to be of either North African or Cambodian heritage (sidenote: how strange is it that this album evoked in me a similar feeling as I got from the final sequence of Apocalypse Now, a film set in Cambodia that is itself inspired by the aforementioned Heart of Darkness and Conrad’s own criticism of imperialist activities in Africa?) with connections to marine life. Still, this info doesn’t exactly take us any closer to knowing anything else about the band. Intent on unearthing the truth beneath this mysterious shamanistic project, I navigated to the other releases listed on the Bandcamp profile. Each of the other 15 releases consist of single long, devotional drone track of a sinister and obsidian nature, and as I suspected from the suspicious date listed for Doum, none of the other releases have plausible dates shown. {Numero}, a bizarre track with an unsettling tribal drum chant at the beginning, shows a release date of December 7, 1972.

Following a hunch and determined to find the significance of that date, I searched for important events on that day in history. The most noteworthy item was the launch of Apollo 17, the final manned trip to the Moon. “What does a lunar mission have to do with an orca-inspired noise project?” I pondered, but then I noticed that this particular Apollo mission was the one on which the astronauts snapped the famous “blue marble” picture of the Earth (seen below). Grasping at straws? Perhaps, but it isn’t far fetched to think that an ecologically minded band may draw inspiration from this strikingly oceanic view of our mother terra.

Sensing that I was on the verge of finding the common thread running through the entire venture, I checked some of the other dates listed on the project’s page.

Don’t you see it? All the pieces are falling into place. There’s a pattern in the numbers. If you add the digits of {678910} together, you get 31. The hottest temperature ever recorded in Florida, Oum’s listed location on Bandcamp, was registered in 1931. Florida and FEMA both start with F. FEMA recently released a coded fact sheet about how to prepare for a heat wave. Don’t you see it? The numbers all line up. They’re all dots on the map, pins on the timeline, cairns on the mountain leading us to the summit and the knowledge it contains.

I’m so close to the truth, friends. So close. What’s that? Drums? What is that sound? Oh, that light, that bright, infernal light…

How (and Why) Your Digital Audio Sounds ...

Goth is the New Black