You probably don’t need this, but just in case, here’s a friendly reminder: Don’t send people death threats. Even if you really don’t like their music.

I know that some of you have noticed you can no longer send me private messages. The reason for this is I am getting tired of the death threats and hate emails. Believe it or not but that s*** looses it’s charm after a while. I am of course sad that I then no longer can receive personal letters from supporters + fan-art in private messages, but please continue to post your beautiful pieces on this page or to my instagram @myrkurmyrkur 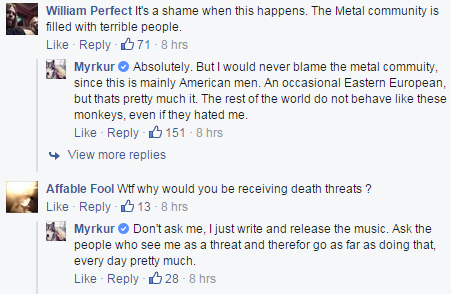 It just appears that a number of men are really, really angry that Myrkur exists and releases music. Why is that? What would drive American males to go out of their way to threaten the life of a female Danish musician? Is it because they think her music sucks? If so, I wonder how many death threats Steel Panther gets. Is it because Myrkur’s strain of black metal isn’t eeeeevil? If so, I wonder how many death threats Panopticon gets. Is it because she’s creating music in a genre that is traditionally known as a conservative boy’s club? You might be on to something!

Music fandom, especially metal, creates very tribalistic mindsets. People live and die by the bands they support and the acts they detest. Sometimes this devotion causes powerful factions that can push boundaries and spur creation. Sometimes it causes a poisonous pool of hatred. In the case of Myrkur, metal fandom has clearly affected the latter.

Full disclosure: I don’t like Myrkur’s music and on more than one occasion, I’ve made fun of an especially cringe-y video of Amalie Bruun playing guitar. That’s me being a petty dick who has to make fun of things on the Internet, and it’s not a good look. But her music isn’t the point. No matter how much I dislike ANYONE’S music, threatening a musician with bodily harm is fucking moronic. As much as we all deeply care about music and want to defend the genres we most love, no musician is conspiring to ruin metal. There are no bands that seek to destroy anyone’s scene. We should all keep an open mind and let people live. While we’re at it, we should celebrate the musicians we enjoy. And if threatening a stranger with death ever crosses our minds as a good idea, we should seek professional help immediately.

Black metal often attracts fans who voice strong opposition to censorship. If you are opposed to censorship, yet attempt to silence a musician by sending death threats, you are a hypocrite. If you consider yourself a fan of metal in this, the year of our lord 2016, and still prescribe to outdated ideals that no one but white men may participate, you are a pathetic relic of the past. These toxic attitudes can no longer be tolerated. If you send hate-filled messages to musicians that don’t ascribe to your perceived views of what metal should be, it is you that is ruining metal. And if by off-chance you happen to be the kind of person who DOES enjoy sending death threats, please let me know below so I may cyberbully the shit out of you.