March Madness is upon us! If you’re like me and only pay attention to college basketball during this special time of year, grab your bracket and crystal ball. We’re about to make predictions and do battle for glory and fame.

Today is Selection Sunday. For those of you unfamiliar with the uniquely American men’s college basketball tournament, that’s the day when you find out what other 62 teams get to battle Duke and North Carolina for the title of Ballingest Boys in the Biz. If I’m shooting straight with you, I should admit that I don’t usually care that much about March Madness aside from enjoying seeing a good friend who also happens to be a Tar Heels fan get stangry on the internet.

This year is different though, because this year my alma mater, Texas Tech University, is *playing* in the tournament (with a likely #8 seed, no less) for the first time since I was a freshman in college. The last time we made it to the tournament, we still had head coach and professional yelling man Bob Knight (whose burning rage makes Xibalba look like a box of kittens) at the helm. Although we were knocked out of the tournament that year by Boston College (a pox upon them), Bob Knight went on the next season to set a record as the winningest basketball coach of all time. Unfortunately, his son Pat Knight took all the wind out of our sails and buried our franchise. Tubby Smith, who came on board in 2013, has done a good job restoring the franchise, and I look forward to us conquering the tournament and vicariously becoming the King of B-ball.

We’ve got a little competition going in the Facebook group to see who is the very best guesser about this year’s tournament outcome. If you’d like to play along, get your own bracket here and make your estimates based on whatever silly parameters you’d like. 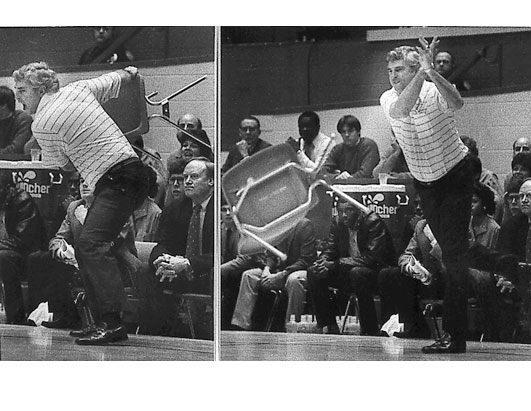 *we’re seeded at 8 or 9 right now, but at the time of this writing, the final bracket has not yet been released.