In 1942, students at the University of Munich, with the help of their professor, started an anti-Nazi resistance movement called the White Rose, printing six leaflets denouncing the crimes of Adolf Hitler and the National Socialist Regime. In 1943, the core group of siblings Sophie and Hans Scholl and their allies were arrested by the Gestapo for exposing the mass murder of Jews in Germany and spreading their anti-war leaflets across the country. Sophie Scholl and her brother were both executed by guillotine for their resistance. Today, I’m pleased as hell to introduce Stahlsarg and their ripping, melodic black metal tribute to Sophie’s courage, “Das Fallbeil.”

Stahsarg may be a relatively new name to most of you, but their brand of mid-paced, melodic black metal will have instant appeal. On their sophomore album, Mechanisms of Misanthropy, you’ll find Windir-esque rhythmic progressions married to icy riffs evoking the wintry glory of Paysage D’Hiver, but with a lush, almost pristine production that lends clarity and precision to the varying blasts and harmonious leads. This level of fidelity can often be a hindrance to black metal, but the British quartet are proficient musicians, and every note, every fill, every shriek is used to full effect to weave a stunning tale of courage in the face of overwhelming adversity, of choosing to do right when the status quo is against you.

“Das Fallbeil is about Sophie Scholl & The White Rose movement and the lengths people will go, to stand up for their beliefs in an environment of intense danger. The track features a guest vocal from Kim Dylla (Gwar, A Winter Lost)”

Dylla’s involvement does more than lend credibility to an already stellar track, however, Speaking for the voiceless Sophie Scholl, she extols virtue and morality with a thick, piercing German sneer that exudes steadfastness. It’s a wonderful complement to such killer tunes, and I can only imagine Scholl would be proud.

In a time when metal should be saying much but seems so often to fall silent in the face of the status quo it should be resisting, it’s refreshing to hear a metal band (and a black metal one, no less), digging into the past to speak truth to power.

Mechanisms of Misanthropy is out October 31st on Non Serviam. You can pre-order it here or here. 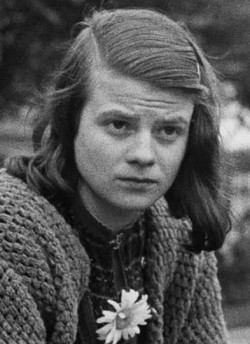