When Gaza decided to call it quits and leave three albums of highly regarded material behind to start Cult Leader, it was a bold move. They wasted no time writing new material and hitting the tour circuit to get the word out in order to keep their musical aspirations afloat. Two years into their existence, an EP and a short 7″ have all been leading up to Lightless Walk, their debut album.

Lightless Walk starts with four warning shots in the opener “Great I Am”. It is frightening in those few short moments, but like a good horror movie, you want to know what lurks behind that door at the end of the hallway. You know, the one that says “Do Not Enter”. Curiosity supersedes any other emotion you are feeling, and you open the door without fear of the consequences. Lightless Walk quickly engulfs you once things get going. After the warning shots are fired, a quick burst of feedback interrupts and Cult Leader descends upon the landscape like a swarm of locusts devouring everything in their path. Whirlwind drumming, sea sick guitar riffing, a thunderous cloud of low end and the vicious snarl of vocals that lie comfortably between death metal growls and hardcore shouting are all in full attack mode. The guitar feedback continues to swirl around relentlessly as “The Sorrower” ‘s main riff carries the track with a sludgy hardcore approach that later morphs into a cold and calculated breakdown that is sure to bring full scale riots to the dance floors of any venues this song is performed live in. “Sympathetic” cleverly works in a dark guitar melody to combat all the grind, sludge and hardcore that permeates throughout its run time. The next two tracks, “Suffer Louder” and “Broken Blades” are bursts of relentless intensity that thrive on keeping the proceedings in an up tempo fashion and focus on providing moments that will make you clench your fists and seethe with rage.

After five tracks of frenzied tumultuousness, Cult Leader offer a brief reprieve with the solemn “A Good Life”, territory that was explored on the Useless Animal 7” from earlier this year with the band’s cover of Mark Kozelek & Desertshore’s “You Are Not My Blood”.  The song actually begins in a harsh heavy tone, but the mood quickly swings to a dirgy guitar lead that serves as a backdrop for the song’s quiet moments.  Visions of a tumbleweed rolling through a deserted western town of a Cormac McCarthy novel come to mind as Anthony Lucero shifts the vocals to a measured spoken word that paints a picture of loneliness and despair. The track slowly builds into chaos as the vocals return to their abrasiveness accompanied by blast beats, while the guitar playing maintains its stillness. 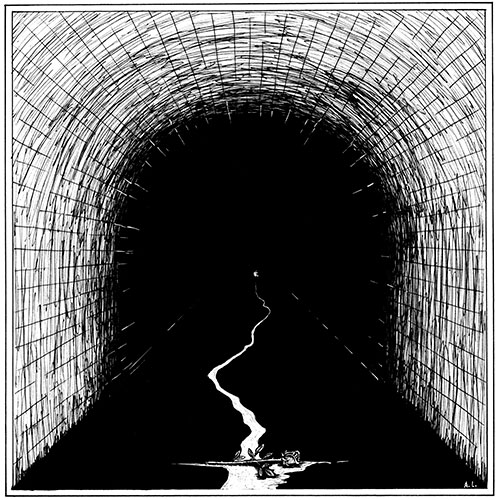 The second half of the album resumes with three more tracks that batter away at you using the formula that works so well in the first five tracks. “Gutter Gods” resurfaces from the Useless Animal  7″ and gets the Kurt Ballou treatment this time around as it provides more punch in his capable hands. More thrashing and grinding ensues with “Hate Offering” before it gives way to guitar feedback with the drums building to a sludgy riff that delivers a final crushing blow to close out the song. The album closes out in two parts. First comes “How Deep It Runs”, a chilling doomy number that marches to another guitar melody that is soulfully dark and carries the song to its conclusion. The second is the title track which leads you further down a darkened path as comfortless vocals lament, “none of you will love me in the end.” A fitting close that will stick with you long after it has left the eardrums.

A wide array of subgenres are at play on Lightless Walk, and a whole host of artists have become adept at intertwining them to forge an identity for themselves. Cult leader has this working for them in a way that others do not; the genres in play can be heard simultaneously meshing as elements of sludge, hardcore, doom, black metal, grind and crust all come together without one fighting for superiority over the other throughout. It’s a rare feat that can only be attributed to the myriad of influences that make up Cult Leader’s sound. These are the types of albums that have the potential to influence many others for years to come. Time is sure to judge this album favorably as it explores a wide range of emotions from anger to hopelessness that listeners routinely tap into when listening to heavy music. Under most circumstances, it would be ill advised to follow a cult leader of any stripe, but if this particular Cult Leader is serving Kool-Aid, you’re going to drink it up like those folks in Jonestown.

Lightless Walk is available now through Deathwish Records. Throw Cult Leader a like on Facebook and show some much deserved support their way. Be sure to catch them on their current tour if they are passing through your area so you can experience them in style.

Into The Abyss: To Greet Death In ...