In the modern information age, we are all afflicted by over-connection. Even in the realm of heavy metal, it is nearly impossible to simply listen to new music without the poison of attachment that comes from publicity, friendly recommendations, comparisons, and unjustifiable hype. On the rare occasion that you do discover something fresh and unexplored, it is an utter joy to leave the self at the door and simply meditate on the unlimited possibilities of the new musical realm. One night a few weeks ago, I was combing the internet for new black metal and found a debut album from an independent duo. The link was tagged simply with, “FFO: Krallice, Deathspell Omega.” Though those two references do indeed constitute an attachment (and may in fact create a second poison, aversion, for some of you), the link was otherwise unadorned with hype, bluster, or hyperbole. Since that night, I have spent many hours plumbing the oceans of existence contained on Bhavachakra‘s self-titled debut, and I believe I am finally ready to be liberated from this wheel of Saṃsāra.

Bhavachakra is an album deeply rooted in Tibetan Buddhism, far beyond mere aesthetics. Though the song titles and album art evoke the concept of the Buddha’s teachings about the cycle of existence and the three poisons that afflict humanity, the music itself does far more to reveal the mysteries of karma and reincarnation. Indeed, the great wheel, and liberation from it, is ensconced within the very structure of the music itself; it is the foundation, the axle from which each song like a spoke springs. Rhythmic motifs, juxtaposed clean guitar lines and lightning fast tremolo riffs, and meditative counterpoint between the guitars, vocals, and drums all corroborate to guide you over and over through the process of death and rebirth. Each new song is a new chance to lose more of yourself, each new soaring major chord a chance to strive for annihilation before a descending minor key returns you to human ignorance. Bhavachakra is a brilliant album in scope and measure, one lovingly crafted with a clear vision in mind.

It is upon consideration of each track as a unique but linked permutation of the band’s identity that the album’s true inner light shines. Each song showcases guitarist/vocalist Kenneth Reda’s honed, nuanced guitar work as he sculpts spiritual landscapes through dense, layered arpeggiated riffs not unlike those used by Krallice guitarists Mick Barr and Colin Marston. On the “Burden of Attachment,” Reda’s major-key riffs ascend ever upwards, gnawing at the limits of human perception as he snarls in a self-afflicted shriek, “What was left forever divides!” After a clean, even gentle and contemplative interlude in the middle of the album, Reda laments how the “The perpetual, conscription, consumes mends and divides,” while his spiraling notes descend again into the somber realm of affliction as a stark and deliberate reminder of the bondage of existence. 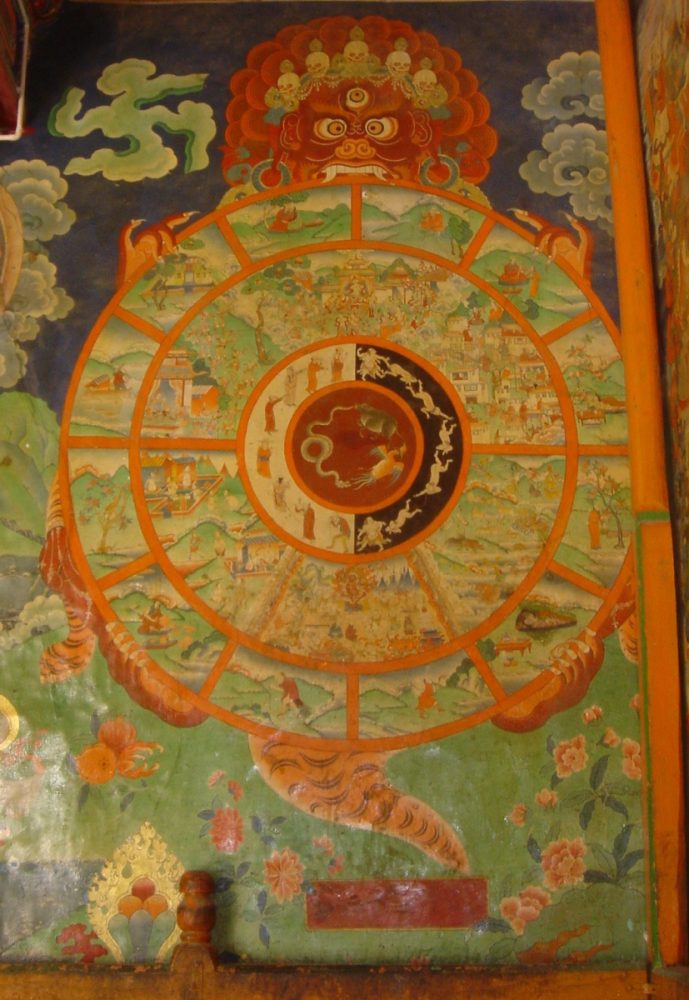 Through each track, drummer Paul Stacks bludgeons his kit with an otherworldly strength as though he is literally attempting to pound his way out of the cycle of existence. If Reda’s guitar work is calculated and precise, Stacks’ drumming feels urgent, dire, and tormented, a constant reminder of the very present desires that torment us as we seek to lose ourselves. That isn’t to say he lacks restraint or skill, though. The staccato cymbal work that opens “Oceans of Existence,” the heartbeat-like martial pulse that marches out the climax of “Sri Yantra,” or the dazzlingly flashy counterpoint between drums and guitar around the 1:20 mark of finale “Kali Yuga” demonstrate Stacks’ unrivaled mastery and dedication to his art. However, the song’s typically shorter lengths lend themselves to a sense of urgency that is perpetuated by Stacks’ mostly reckless pace, creating an immediacy not found in the guitar lines or on similar dissonant black metal albums.

Yet, much like the religious experience upon which it fixates, Bhavachakra is a dense, even off-putting work that requires dedication and patience to understand. Its density and cyclic nature in fact work against the immediacy of the percussion, stretching the record’s supposed length out much further than the actual allotted time. Although my appreciation for the band’s dedication to their artistic vision grew on each repeated listen, never once did it feel effortless to make it through the entire album in one session. The fact that each song feels like a new manifestation of the same entity, despite lending credence and weight to the album’s ethos, acts as a double-edged sword that can lend itself to monotony upon repeated listens. The somewhat thin production and indistinct bass work leave even less to grasp on each repeated passage through the cycle.

Ultimately, Bhavachakra is a unique exercise in spirituality given sonic form. At its best moments, such as the closing track “Kali Yuga” and on mid-album highlight “Sybaritic Apparitions,” the band leads you on a winding path through the horrors of humanity that you may find enlightenment amid the blasts, furious arpeggios, and mystical clean interludes. These moments are incarnations of the sublime made all the more earnest and convincing by the band’s intentional songcrafting. At its lowest, Bhavachakra is another reminder of the suffering caused by cyclic futility; it is an album both blessed and cursed by its very core ideology, one that manages to never quite escape its own attachments. Hopefully this will be the first incarnation upon which future endeavors will build in order to truly find that perfect balance between liberation and annihilation.

For so boldly embracing and facing its own identity as a cyclical, dissonant black metal album that speaks well of future brilliance to come, I award Bhavachakra