Everything old is new again. JNCOs are back. People went wild over the NES Classic. We’re in the midst of a Cold War with Russia and on the brink of some proxy hot wars. Our country is run by a 2-bit actor that may or may not be suffering from mental problems. We are always due for a dose of retro. It’s been a long time since industrial, or at least, accessible industrial, was the hip thing, and the LA group 3Teeth seem to be leading the charge.

The band has risen fairly quickly in their short career (they started in 2014), getting on Chicago’s Riot Fest and landing a key opening spot for Tool. Some of my friends in the electronics/industrial scene have remained non-impressed with the band’s output and sudden success. Also, their social media game is, um, questionable.

That’s the band using a CNN report on the “Mother Of All Bombs” being dropped on Afghanistan. I think it’s supposed to be some sort of social commentary, but….yeeeeeeeahhhhh.

Time will tell if that was just sour grapes or if they were on to something. On the flip side, places like Metalsucks have said their new song “Shutdown” “sounds more like Nine Inch Nails than Nine Inch Nails does these days”. I’ll leave that up to you, dear reader, to decide. Hey, if this gets us to a full revival of industrial, then I’m interested in seeing what happens. After all, Stabbing Westward is doing some reunion shows. I feel that the 3Teeth debate will only grow along with the band’s popularity. What isn’t debatable, though, is the utter craptaculosity of their shirts. 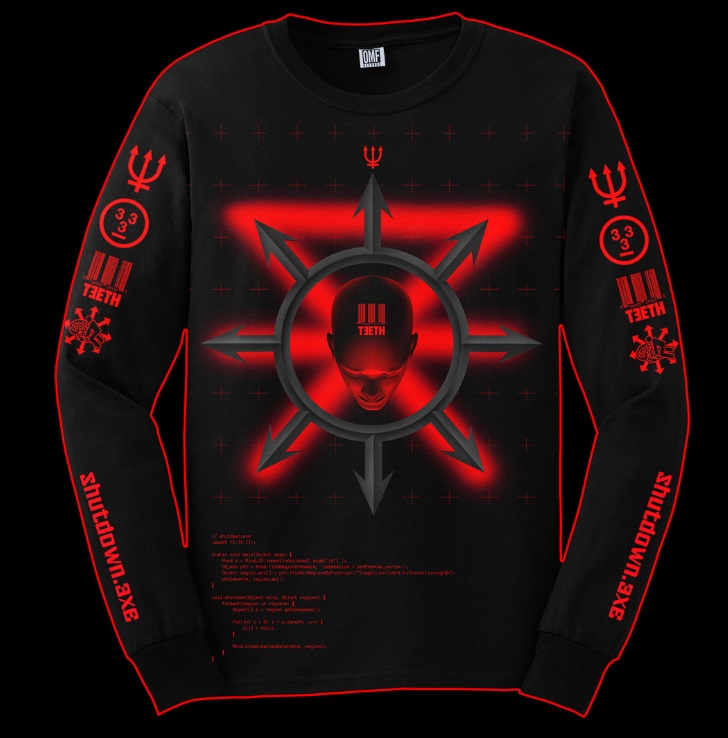 Holy Mother of Puke. This is what it must feel like to wear an underground rave in the 90’s. There is so, so, so much going on with this shirt and not a single thing is good about it. Look at that main logo! I know the band is trying to go for that late 80’s/early 90’s sound, but there’s no reason to bring computer graphics from that same era into it too. He looks sad, like he tried out to be on Meshuggah‘s cover for obZen, but was rejected at the last minute for the other guy. Maybe he’s just bummed that someone used too much “Feather” on the little triangley thing behind him.

No band needs this many symbols and logos and words and words and words on anything, let alone their shirt. I hope all that writing on the bottom is a legitimate command, someone tries it and ruins their computer. It’s oddly appropriate that this shirt is done in the red-and-black scheme of so many gamer laptops. I didn’t know Kool-Aid made a flavor called “Electric Digital Kool-Aid Man Blood”. Of course, the back isn’t really any better. 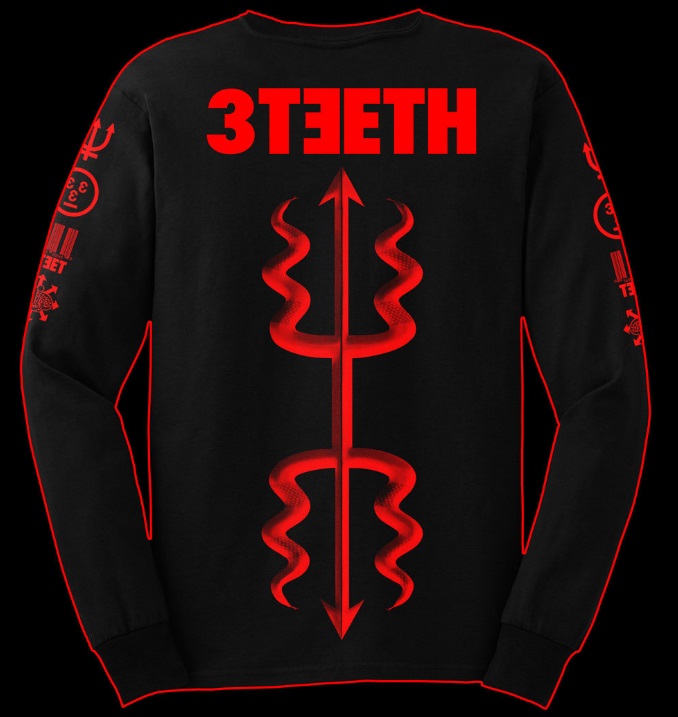 By Poseidon’s beard, that’s a squiggly trident. Actually, it’s a double trident. It’s a Bi-Tri. Perfect for getting to those hard-to-reach spots or for barbecuing. Nice of the band to put their name on the back since they kinda sorta forgot to put it on the front. Can you blame them? They just couldn’t spare a single piece of real estate on the front. Everything else was just too good and too important. I know the shirt doesn’t really have the red outline around it that the picture does, but I wouldn’t put it past the band for trying. 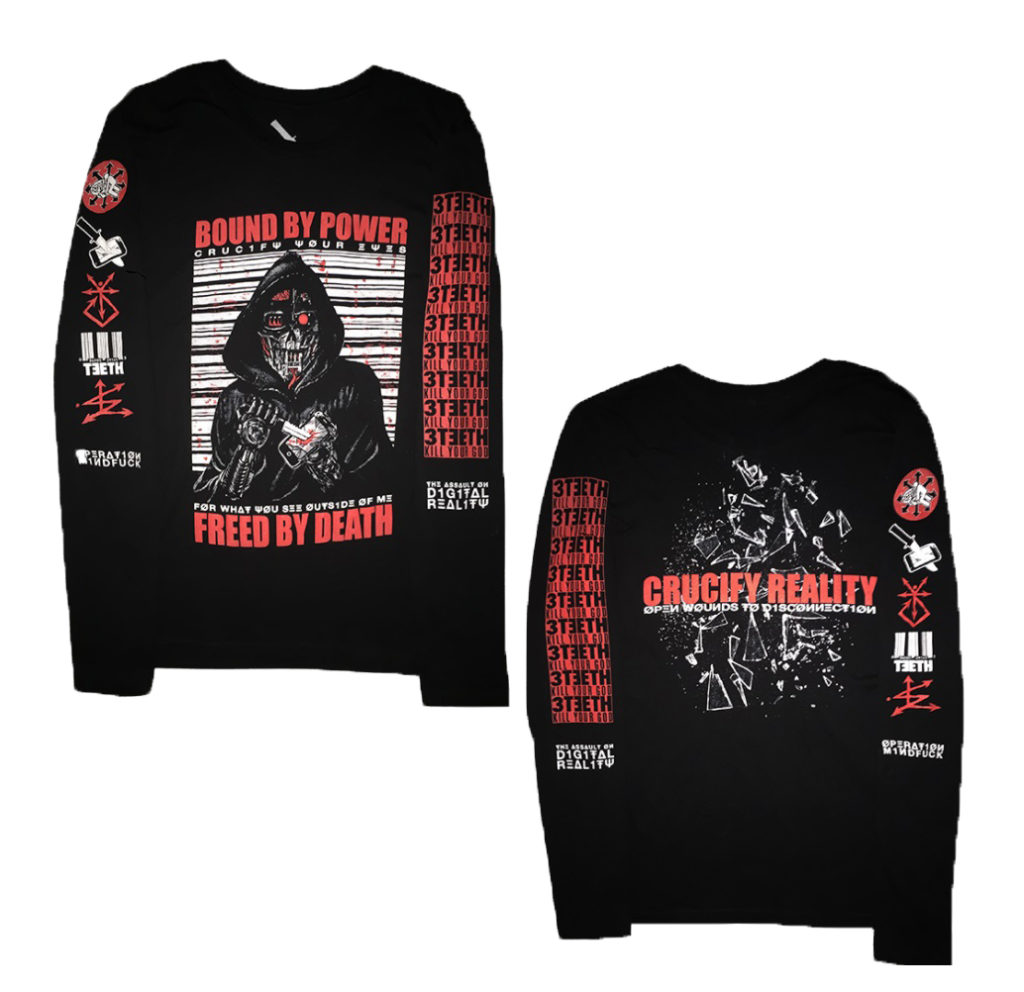 Oh, look. More black and red. At least they let the color white come to the party this time. Oh, look. More extravagant uses of logos and symbols on the sleeves. They couldn’t just leave that trend to death metal longsleeve shirts, could they? Taken piece by piece, most of the words on this shirt don’t make sense. “BOUND BY POWER”. Eh, that one might require some explanation. “CRUCIFY YOUR…” yeah I have no idea what that says. I had to zoom-in on Photoshop to see that it says “Eyes”. I would’ve been better off assuming that they were just wacky symbols, since y’know, it doesn’t really make sense. The bottom lines “For what you see outside of me FREED BY DEATH” just sounds like the bad scribbling of an 8th grader that’s seen The Crow: City Of Angels one too many times. All the words and symbols are so distracting, I almost missed the Stranger In A Strange Land-era Eddie getting the half-assed hacker treatment. He’s so cute with his widdle knife! 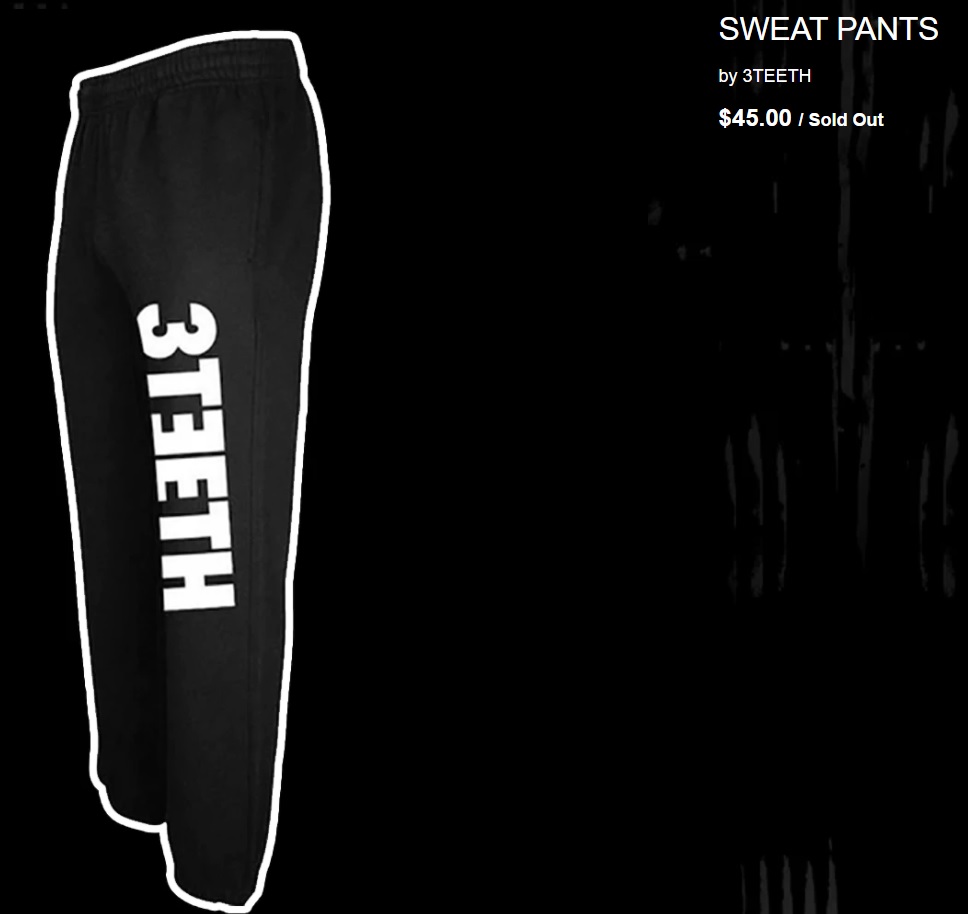 I’m not sure what is more upsetting: That 3Teeth are selling sweatpants for $45 or that enough people said “Yes, this is what I want to spend my money on” that it is already sold out. I could definitely see Maynard wearing these while not recording new Tool songs. The crotch will probably wear out real fast.