Time to worship somewhere else.

The Bristol, UK-based Temples Festival was abruptly canceled yesterday by organizer Francis Mace. The fest, which was set to take place from June 3rd through June 5th boasted a solid lineup including Mayhem, Melvins, Carcass, Grave, Agoraphobic Nosebleed, and ToH favorites like Mgla, Pissgrave, Iron Reagan, Primitive Man, Gnaw Their Tongues, Dragged Into Sunlight and a bunch more. The announcement comes as a shock to fans considering, y’know, it was supposed to take place this Friday. It was so abrupt that just a few days ago, the festival’s Twitter account posted set times for the bands.

Agoraphobic Nosebleed initially posted this message on May 25 which should have been an indication that things we’re not going well for the festival.

Weekend Nachos followed up with their own post 3 days later: 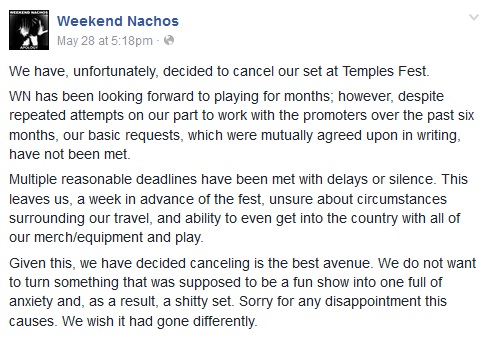 Mace himself took to Facebook just yesterday to explain the situation:

A few bands have responded to the cancellation. 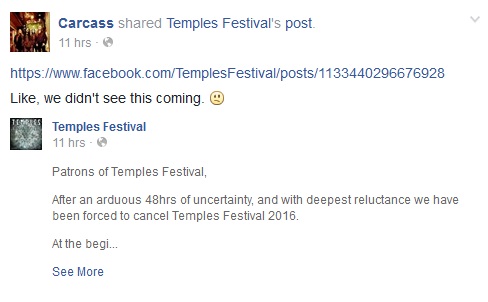 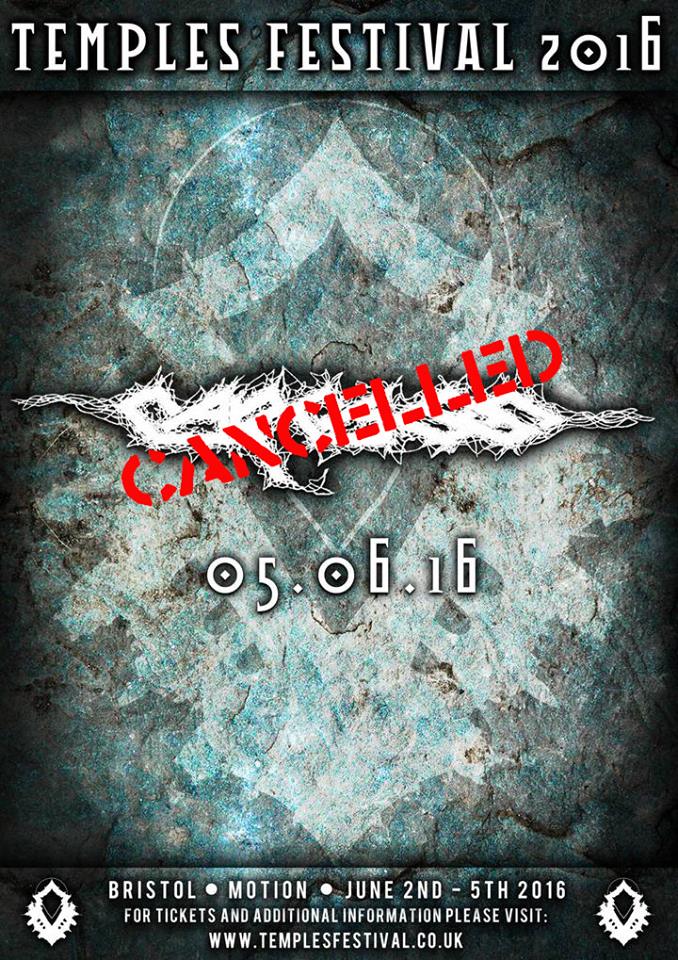 All Pigs Must Die

Heck, just yesterday, Jucifer posted dates for their European shows and still listed Temples Fest, so who knows how or even if all the bands were informed. 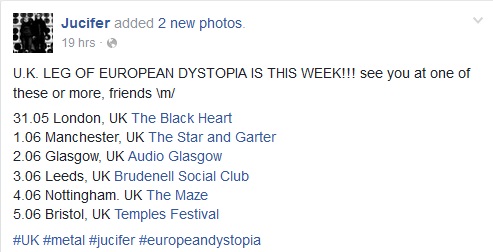 Primitive Man, Dragged Into Sunlight, ACxDC, Arabrot and Bongripper will be doing a replacement show for the fest at The Fleece in Bristol. Tell your weird friends.

Ethan Lee McCarthy from Primitive Man even chimed in on Mace’s post saying:

Putting on shows is a difficult, thankless, stressful, and money-losing task. Putting on a massive multi-day festival is all of that times 1000. This sounds like it was one big clusterfuck of a clusterfuck. Fans are out of money, the bands are out of money, and even Mace is out of a lot of money. Some bands are scrambling to fill the dates or completely rearrange their schedules. It’s a small consolation that the festival was cancelled less than a week before rather than the day-of the shows. As of this writing, the festival’s website does not mention the cancellation and it appears that tickets can still be purchased. Here’s hoping that everyone involved lands on their feet.