One of the most wonderful things about this blog is the huge amount of diversity among the writers. Although there is some overlap, there are certainly bands that jive with some but not all, and thank Yog-Sothoth for that. How terrible would this site be if we all only liked OSDM or skronk? Over the last few weeks of talking shop, several of us came to realize that there are gaps in our respective musical heritage. To level the playing field (and spice things up a bit), we decided it would be fun to send each other some albums for a blind review, and thus the Record Swap was born. This week’s matchup: W. and Dagon.

The rules to this exchange are pretty simple:

Easy enough, right? Unlike some of our writers, Dagon and I weren’t trying to one-up each other or prove our credibility or make each other review something we’d hate. Instead, we each selected an album we thought the other would find interesting. Check out our swap below!

Despite the colossal amount of music that gets tossed around in our Toilet community, somehow Degeneraterra slipped past everyone’s radar. I am not a man who usually “progs”, but I felt intrigued by the album’s art and title. If you split both words you get Portuguese (and probably Spanish) for “degenerate Earth”. Anyway, I pressed play on Eidola’s latest effort and I was surprised by how much I liked it from the go. Upon listening I drew some comparisons to Leprous, which reminded me of my good friend and former president of the United States. Our mental connection shined when, later in the same week, he proposed that we should swap “mystery albums” for reviews based on the music alone. I instantly knew I had to throw Degeneraterra his way. – Dagon

The first thing I thought when I started Degeneraterra was, “Is this somehow associated with Kurt Ballou?” Press play on the Bandcamp stream below, and I don’t think you’ll fault me for thinking that. The renowned producer has his hand in a lot of cookie jars, many of which are of the progressive/hardcore variety. Eidiola certainly seem to be riding the wave of progressive or post hardcore bands like Between the Buried and Me and Protest the Hero, but within the first few tracks of this album, a key difference becomes immediately apparent. There’s very little emphasis on the metal here.

Sure, tracks like “Omni: First Temple” and “Divide” have some parts that go hard, but overall, there is very little here resembling the more extreme side of the genre we love. Musically speaking, I’m totally okay with that when it comes to what Eidola are doing. This album is rich with dynamics and feeling; double-bass armored attacks give way to gentle grandpas guitars. The audible bass rumbles along only for a soaring vocal lead to come into play. The album glides over peaks and plummets into valleys and overall demonstrates a maturity of construction. The track listing seems to indicate that this record is a concept album, and its grand scope and intricate details work well to enhance the cyclopean effect. No two songs sound the same, but the alternating waves of gravity and levity twist to build a symmetric structure, displaying the masonic work ethic of the artists.

Vocally, though, is where the album falters a bit. Within the first few minutes it became overwhelmingly apparent that the vocals were going to be a struggle for me, and repeated listens (and the very limited extreme vox that appear) did little to alleviate this issue. Still, I imagine that the vocals here will appeal to many people, especially if you are a fan of the aforementioned progcore bands; if this review has piqued your interest thus far, definitely give them a chance.

Ultimately, this is an interesting, albeit imperfect, progressive hardcore album. After jamming it multiple times, I almost wish the band would actually cut more of the metallic tropes from their sound. When they decide to open up the innovation on tracks like “Humble Ledger (Gnostic States)”, “Contra: Second Temple”, and “Omega: Third Temple”, they show that they’re extremely capable of creating something great. The more progressive tracks act as rock-solid cairns, syncing up all the diverse elements at play and guiding your wandering heart through the maze. If you can keep yourself from being distracted by the few faulty trails, you’ll find Eidola have taken you on an adventure. Keep at it, guys! – W. 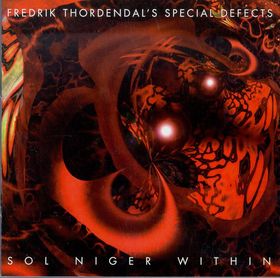 My pal Dagon has a pretty open mind when it comes to the metal he enjoys, so I wanted to hear his thoughts on one of the more unique records in my collection. Solo Niger Within is the first and only (thus far) solo album from Meshuggah‘s lead guitarist Fredrik Thordendal, and yup, you guessed it, it sounds sort of like Meshuggah. However, the similarities are only there in part; the whole of Sol Niger Within sounds like a bad acid trip, thanks largely to the efforts of jazz/prog/weirdo super-duo Morgan Ågren and Mats Öberg, two of the many hyper-talented musicians lending their abilities to the record. The end result is one long experimental track broken up into a number of jazzy, psychedelic segments with undeniably heavy groovy and emotional solos. multiple versions and edits of the album exist, but I sent Dagon the original (and in my opinion superior) version. – W.

I am not a Meshuggah fan. Their music never moved me. Needless to say, I was skeptical when I learned that a Fredrik Thordendal record would be my assignment. But since it came from someone whose taste I respect and admire, I had to give it a fair chance. I’m glad I did. This was a very pleasant surprise, even though pleasant is not what Mr. Thordendal had in mind when he wrote this. Not in the slightest.

Sol Niger Within storms out of the gate with a heavy, syncopated rhythm. Soon, a serpentine lead starts playing, but not perpetually. It almost seems to fade in and out of existence. The juxtaposition of these elements is prominently featured throughout the record, and represents its greatest triumph. There is a delicate balance between these seemingly antagonistic forces. On ground level, there’s persistence: a mechanical, distorted guitar tone that matches the harsh drum beats like a machine marching forward in unpredictable pattern. Above, an ethereal entity moving either in warm fluidity or whirling dissonance. Around the 18 minute mark, for example, there is a guitar solo that starts as the former and finishes as the latter. The resulting atmosphere is rather unnerving. It is menacing and dizzying, like a descent into paranoia and madness.

The creative way in which other musical elements are used greatly enhance the experience, especially considering that this is apparently a one song album. The vocals are varied and often employed as an instrument. Words are spoken by a gravely voice in a detached, otherwordly delivery. Words are shrieked in quasi-black metal raspiness, but performed in a “rapping” pattern that serves as yet another rhythmic layer. Repeated listens reveal electronic blips and glitches here and there, beyond a brief “noise” interlude that is also in the song. The “ethereal lead” is not performed entirely on guitar. In a couple moments, more so towards the end, it gives in to horns and – my favorite – an organ. The organ bits are perfecly placed and performed, almost too eerie.

Intriguing and entrancing, Sol Niger Within is a one-song record well worth repeated listenings. It is creative, dynamic and strangely addictive. – Dagon

We’ve got plenty of interesting pairings lined up for the coming weeks, so keep your eyes peeled for more editions of Record Swap. If you’d like to participate, shoot me an email at toiletovhellwhiff@gmail.com.

(Photos VIA and VIA)